Just One Floor Away 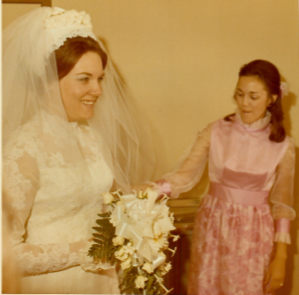 Just One Floor Away

Barbara Coffey chuckles as she shares, “I make really quick decisions!” The Pennsylvania native turned Texan is making plans to move into an Independent Living apartment at Stevenson Oaks in Fort Worth.  “I responded to the first postcard they sent out and it just fit for me, so I signed up.”

This wasn’t the first time Barbara had made a quick decision. In 1971, she was set up on a blind date with Mike Coffey, a handsome young man from Fort Worth who delighted her with a day at the State Fair. Within two weeks, the two were engaged and planning a wedding. Fifty-one years of marriage, four children and 10 grandchildren later, it’s fair to say she made a sound judgement call. Barbara recalls the first time she met Mike’s family, “It was only five weeks after our first date and my mother hosted a big thanksgiving meal with his family and my family.” Attending the meal was Mike’s sister, Mary, who instantly fell in love with Barbara and pulled Mike aside to excitedly whisper in his ear, “Oh Mike, she’s the one!” From that moment forward, there was a special bond between the future sister-in-laws.

Over the years, this bond has seen the pair through a variety of ups and downs, but none so monumental as Mike’s passing in 2016. Barbara still lives in Fort Worth in close proximity to her children and near the Stevenson Oaks campus, which is partially why the community is so attractive to her. Meanwhile, Mary resides in Plano, making the occasional 100 mile round-trip trek to visit Barbara. One day, Barbara went out on a limb, knowing that Mary eventually wanted to return to Fort Worth, and suggested Mary consider a move to Stevenson Oaks too. “I wasn’t so sure at first, I took a little more convincing than Barbara,” laughed Mary. Eventually, Mary decided to take the plunge and secured a future home at Stevenson Oaks as well. Mary opted for an apartment on the ground floor, inside a courtyard while Barbara is facing east on the second floor.

“I remember the very first time Mike brought Barbara home to watch a TCU game with our family and she spent the night in my room with me. I’ll never forget waking up to realize she had woken up early to put on a pot of coffee and was talking with my dad at the breakfast table. We all fell in love with her even more,” recalled Mary. The pair who has once shared a room will now share their next season of life in the same retirement community, only one floor away from one another. All in all, Barbara and Mary both agree that Mike would be pleased to know they are facing this new adventure together.

Mary (left) and Barbara (left) pose for a picture together at a recent family gathering.